The judicial system of Delaware is made up of a district court, state supreme courts and a number of different trial courts. Many of these trial courts are given limited jurisdiction and deal with one specific subject or issue.

The United States bankruptcy court, District of Delaware is an example of a subject-matter court which deals specifically with cases of bankruptcy.

The Delaware Family Court deals with all domestic issues. Adoption and divorce would be two of the types of cases to go through this court.

There is also a Justice of the Peace Court system. Multiple courts within, spread across the counties of Delaware, deal with debt and small claims up to a dollar value of $15,000.  Similarly, you can use an Alderman’s court in six of the regions of Delaware. These Delaware Alderman's Courts deal with civil issues which tend to be very small and not worth a high dollar amount. Traffic offenses would be an example of something to go through the Alderman’s Courts.

The trial courts in Delaware are known as the Court of Common Pleas. These courts have a complicated past, but are currently used for civil hearings where the dollar value is $50,000 or below. These courts have jurisdiction over criminal vehicle offenses but also act as a preliminary court for hearing some felony charges. 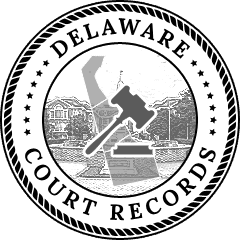 Delaware does not have an intermediate appeals court. Appeals go straight to the Superior Court of the state of Delaware. It has original jurisdiction. This court deals with both civil cases and criminal cases. Cases involving felonies or dollar values over $50,000, or escalated from the lower courts will be heard at the Superior Court.

There is also a Supreme Court. This was founded in the 1950s, and acts as the “court of last resort” in the state. The Supreme Court is the top of the hierarchy when it comes to decision making, felonies and appeals within Delaware.

Types of Courts in Delaware

You can use our search function to see court records from Delaware. Since the Freedom of Information Act, which was passed by the state in the 1970s, citizens have the right to access the records kept by the courts. Any of these records held can be copied if required.

You can search a huge number of details including judgments against a person or against a business corporation, mugshots, plea and sentencing details and more. Most modern records have been digitized so that they can be accessed online. Some older cases may require specific requests to see the information, as not all records have been made available on online databases. The Renaissance Centre in Wilmington, Delaware can deal with these older requests.