Hawaii’s court system works in a similar way to many of the other states of the USA. There are trial courts dealing with general jurisdiction issues as well as specific subject-matter courts. The trial courts can escalate cases to a state court of appeals as well as the court of last resort for Hawaii, the Supreme Court.

The United States bankruptcy court in the District of Hawaii deals with all bankruptcy cases within the state. It only has jurisdiction for this specific subject.

Similarly, Hawaii has a subject-matter court for family issues. The Hawaiian Family Courts deal with issues such as domestic violence, relations and parental rights such as the guardianship of a child. They may also deal with a lot of custody issues.

Among the trial courts in Hawaii are the District Courts that deal with civil cases up to $10,000 in dollar value where a jury is not required. They can also deal with other small claims and civil cases where claims do not amount to a dollar value of over $25,000.

Hawaii's Circuit Courts complete the trial courts in the state and on the island. They have jurisdiction over guardianship, probate issues, and civil cases with dollar values between 10,000 and 25,000 dollars. The circuit courts of Hawaii as well as the district courts may share the jurisdiction where the monetary value is between these sums. 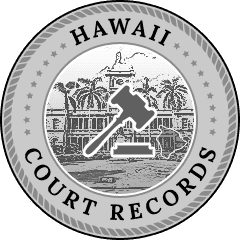 The Hawaii “Intermediate Court of Appeals” is called the ICA. This acts as the intermediate court dealing with appeals and has done so since 1959. Issues escalated from circuit courts and other trial courts on the island of Hawaii can be appealed to the ICA.

As with all states, there is also a court of last resort, this is the Hawaii Supreme Court. Appeals from federal or lower courts can be heard here. It also deals with regulating the state’s legal workers (such as attorneys) and has jurisdiction over election cases. This court was established in the 1950s.

Types of Courts in Hawaii

Use our database search to find a huge number of Hawaii court records, which are made publicly available by the state under the Uniform Information Practices Act. You can see details such as plea and sentencing details, bankruptcy details, mugshots and police reports as long as it is not protected by law or otherwise redacted. This is the right of Hawaiian citizens in line with the Freedom of Information Act.

In rare cases, some of the older records may not have been digitized to access online, and specific courts may need to be contacted to obtain access to the details of some historic cases. For most modern cases, our database search should be all you need.