The judicial system of Louisiana is slightly more complex than some other states. There are a number of trials courts, including many courts of limited jurisdiction such as a specific family court. As well as these trials courts there are three federal courts operating in Louisiana, as well as a court of appeals and a supreme court for the state.

Louisiana’s federal courts sometimes hear appeals from the other state courts, but are also where most federal lawsuits originate in the area. There are three of these such federal courts:

There are 42 district courts, one for each district of the state of Louisiana. These courts are given original jurisdiction and deal with felonies, property cases and both criminal and civil issues.

Four limited-jurisdiction juvenile courts also exist. They deal with adoption law but also cases pertaining to children under 17 years of age. In East Baton Rouge Parish there is also one specific family court, which sometimes shares jurisdiction with the juvenile courts.

The Mayor's Courts, of which there are around 250, are something we don’t see in many states. They have some judicial powers dealing with local issues.

It is common in Louisiana for a smaller claim or case to be dealt with by one of almost 400 “justice of the peace” courts. These deal with small claims up to $2,000 in dollar value but also have jurisdiction in civil cases up to $5,000. 46 city courts also operate within city limits and deal with cases up to $15,000 in value. 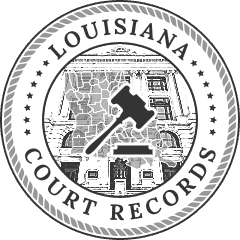 Louisiana has Circuit Courts of Appeal, acting as appellate courts. There are five of these which handle civil cases, appeals from lower courts and many other criminal cases. These intermediate courts have been around since the 1870s and many of the local court cases from district courts get escalated to these intermediates.

Each state has a court of last resort. For Louisiana, this is the Supreme Court. It was founded in the early 1800s and has 7 judgeships. Appeals can be heard at this court, which has the highest overall jurisdiction in Louisiana.

Types of Courts in Louisiana

Use our tool to search for court records from current or historic cases in Louisiana. Since 1940 it has been the right of the public to access all state government records. The Louisiana Public Records Act protects this right, unless another specific law prohibits this access. You can see mugshots, plea details, arrest warrants, bail and much more. Search by case number or surname.