The state judicial system of Wyoming features one federal district court, many trial courts with regionalized jurisdiction as well as general and limited jurisdiction, these feed into the state supreme court which is where appeals can be heard from Wyoming circuit and trial courts.

The federal district court in Wyoming is a point of origin for a number of federal cases; if there are appeals originating from the United States District Court for the District of Wyoming, they are referred to the 11th Circuit.

Similarly, there is also one specific bankruptcy court with jurisdiction over cases relating to personal and commercial bankruptcies. This is called the United States bankruptcy court, District of Wyoming.

There are different varieties of trial courts within the state, with their own levels of jurisdiction.

Wyoming District Courts have general jurisdiction and deal with civil cases, criminal cases and in some scenarios can even see appeals from the lower courts.

The Circuit Courts are below these in the hierarchy and can hear some criminal cases like misdemeanor cases and small civil cases of lower financial value.

Further down the chain come municipal courts, these exist within certain city limits and they have limited jurisdiction and often just deal with things like traffic offenses in the cities and regions of Wyoming. Municipal Courts only deal with cases up to $750 in dollar value. 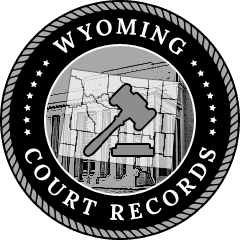 Wyoming does not have a specific appellate court between the supreme court and the state and district courts. This means that cases that need to be referred upwards can either go to the District Courts or they can be dealt with by the Supreme Court in extreme situations or when called for.

The Supreme court also has a responsibility over the rest of the state judicial system and can overrule decisions further down the chain. Appeals can be heard within the Supreme Court, which acts as the court of last resort for the most important issues from Wyoming.

The Wyoming Supreme Court is given original jurisdiction over issues relating to custody, Quo warranto and habeas corpus. Other types of writ are exclusively dealt with by the supreme court, too.

Types of Courts in Wyoming

Our court record search can help you find what you are looking for. Court records from cases to go through Wyoming courts are kept under public records and protected by the Freedom of Information Act. This means that you have the right to view and copy records regarding all of the government records unless they are otherwise protected by law. Records including plea and sentencing details, arrest warrants and much more can be found within our records search for the state of Wyoming.