The judicial system of Maine has a federal district court, supreme court (also called the Maine Supreme Judicial Court) and a number of trial courts which all have slightly different roles to play within the legal system.

There is a federal bankruptcy court situated in the state which deals with subject-matter cases, purely relating to bankruptcy issues. This is referred to as the United States bankruptcy court, District of Maine.

There are also specific probate courts. These deal with issues relating to estates, wills and inheritances. The probate court in the state of Maine also deals with name changes and adoptions.

Trial courts include both District Courts and Municipal Courts in Maine. Maine’s district courts meet at 31 different locations throughout Maine. The courts sit with no jury and deals with civil matters as well as criminal cases.

Though there isn’t a specific family court, there is a family division of the district court to deal with family issues including divorce and adoption.

Small claims courts can also deal with cases with a monetary value of up to $4,500 in the state. 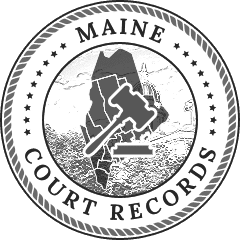 There is no specific court of appeals for the state of Maine. Some appeals will go straight to the court of last resort, the Maine Supreme Judicial Court. This has been in operation since the early 1800s. It is one of the only supreme courts that can issue advisory options. It has seven judgeships.

Instead of going through a state court of appeals, many of the cases that are escalated from state courts end up in the Supreme Court.

Types of Courts in Maine

Court records from cases to take place in Maine are available online. Use our search tool to find specific court records pertaining to a case that has been carried out in one of Maine’s federal or district courts. Details including pleas and sentencing, police reports and court costs can be found via these records among a plethora of other details.

The rights to see these details are protected by the 1959 Maine Freedom of Access Act. This ensures that the government in Maine has to be transparent in all its dealings. Not all data has been digitized. In the rare case that you cannot access online you can contact the Maine Supreme Judicial Court Clerk's Office for further information.