North Dakota’s judicial system comprises a federal district court as well as a number of trial and circuit courts, which are then backed up by a court of appeals and a supreme court if the cases need to be escalated further.

The one federal district court in North Dakota, is simply entitled the Federal Court, District of North Dakota.

There is also a specific bankruptcy court which purely has jurisdiction on matters relating to bankruptcy; The District of North Dakota Bankruptcy Court.

The District Courts form the majority of the trial courts around the state of North Dakota. There are 53 counties in the state in total, which are represented in 7 different districts. All of these courts have general jurisdiction. There are not specific juvenile hearing courts, instead, these also go through the district courts.

With limited jurisdiction, and under the District Courts in the hierarchy, there are Municipal Courts to deal with many of the smaller city violations. Often, these are things like motoring and parking offences, but some other criminal cases can start here before being dealt with by the District Courts or even the intermediate courts. 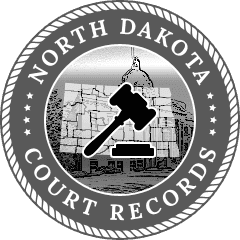 The Court of Appeals acts as an intermediate within the state. There are only three judges serving on this court at any one time. They often serve for just 12 months at a time. The court is not used all the time, and only comes into play when the Supreme Court assigns appeals to be heard here. There have been examples of many months without hearings within the Court of Appeals, which is quite unusual for an appellate court.

Many of the cases are instead heard at the Supreme Court, the state’s court of last resort. This has five judges who sit and exercise jurisdiction over all appeals. The Supreme Court also has authority over these lower courts and legal professionals within the State of North Dakota.

Types of Courts in North Dakota

You can use our simple tool to access court records that have been made publicly available by the state of North Dakota. Information including mugshots, divorce records, plea and sentencing details and a variety of other court records are all available online. It is the civil right of citizens to see these details.

The North Dakota Open Rights Statute allows you to see the records from each of the 53 counties of North Dakota, and operates in line with the Freedom of Information Act. Records continue to be digitized and made available online for people to copy and refer to, whether you are looking for peace of mind or need specific information about a historic case to pass through North Dakota’s judicial system.